Ravens are smart, some say the smartest birds on the planet.  They will bother hunters until the hunters follow them to where their prey is walking around, knowing they will likely get some scraps.  They will place nuts on the road so that an unsuspecting future road kill will walk into a trap and get tagged by a speeding vehicle.  They are good with faces – one park employee angrily shoed a raven off of her bike seat, and from that day on all of her future bike seats were torn up, can I say, ravenously?  The special trash can lids at the Grand Canyon aren’t because of bears, they are to keep out ravens.  They used to have a design that required pushing down in four places and twisting the lid to get it off, but the ravens would form teams with one on each pressure spot and one in the middle squawking when it was time to turn.

Owen and I, being the light sleepers, started peeping across the beds at each other, making silly faces while the other two dozed unaware.

We started the day with a scrumptious breakfast in our dining tent, with waffles made from cast iron waffle makers crafted in 1910.

Carb-loaded and hydrated, it was time for our hike into the depths of the Grand Canyon.

We loaded the kids up with sunscreen, hats, and Osprey water packs, and Don loaded us into the shuttle.

We headed to the South Kaibab trail (pronounced Kai-uh-bab, or, if you’re a local and cool, Sky-bab).  The trailhead starts with some somewhat slippery switchbacks (due to tiny pebble rocks and dirt, not wetness), and we ventured down gripping the kids’ hands to prevent their untimely demise.

We also tried out a new piggy-back contraption for Owen, and it was really cool.  You can see it in the featured image, along with this one, when Owen was “hiding.”

After about an hour venturing down next to rocks with progressively changing in birth eras, we made it to our destination, Ooh Ahh point.

I have a physiological fear of heights.  In fact, while typing this and thinking of Ooh Ahh, my hands just started sweating.  We got the kids up with us on a boulder for a pic that shows that kids need sunglasses too.  I guess Andre’s (borrowing Don’s for the pic) weren’t helping.  Regardless, #ParentFail.

Katie then dragged me out further onto a cliff boulder so that I could once again face my biggest fear, letting my legs freeze up as I stoically sat by Katie adjacent to our impending doom.  The neurotransmitter or adrenal fluid that was allowing me to do this ran out, so I scurried back to safety.

After rehydrating and a sufficient break, Don and Andre led the hike back up the Canyon.  Andre, thinking this was a competition for some reason, didn’t want to take breaks and wait for the rest of the group.  He pulled Don up the Canyon, making it up in less than half the time it took to go down.

I carried Owen with the piggy-back contraption, and that free-loader loved that, thinking the way up was SUPER easy.  By the top, my body was pretty glad we were finished.  Katie played pack-mule and carried up all of the water, so she was glad, too.

We headed back to camp for the lunch Mark prepared (Don’s wife had created this one), some amazing chili.  More 2nds.

We followed lunch with Andre’s favorite part of the Grand Canyon, biking the Hermit Trail along the rim.  Only shuttle buses and employees are allowed on this road, so it’s like taking a bike ride alongside the Grand Canyon with a road all to yourself.  Our tour guide was incredible, and, despite two flat tires, had a wonderful time. 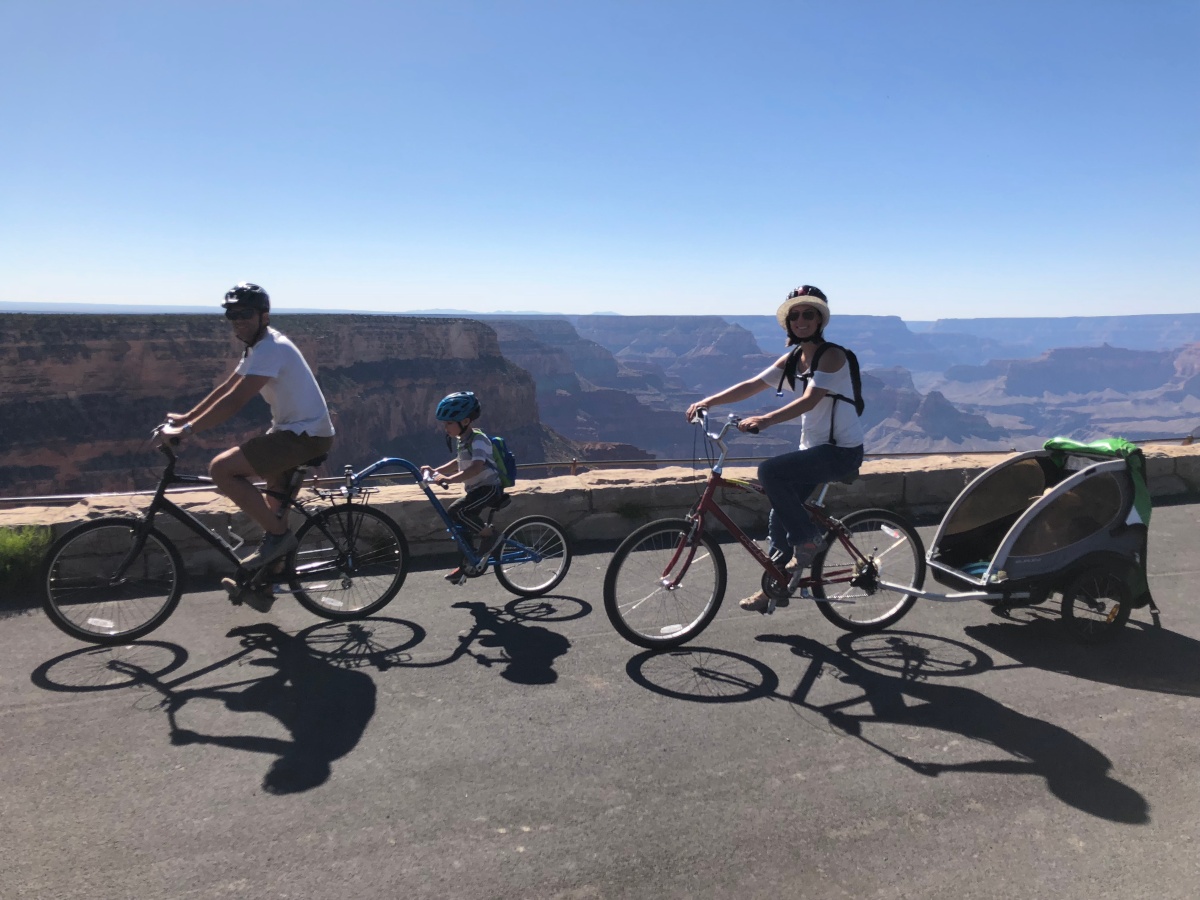 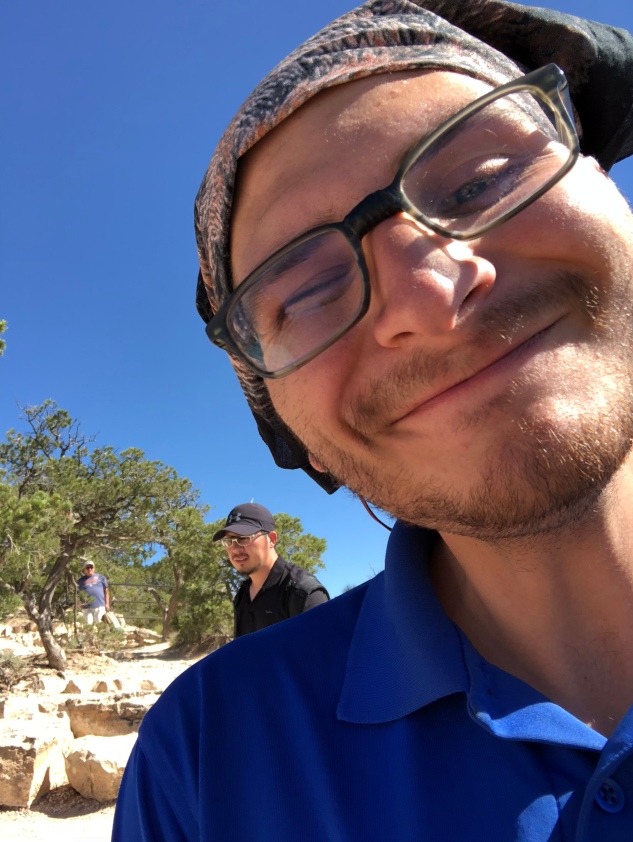 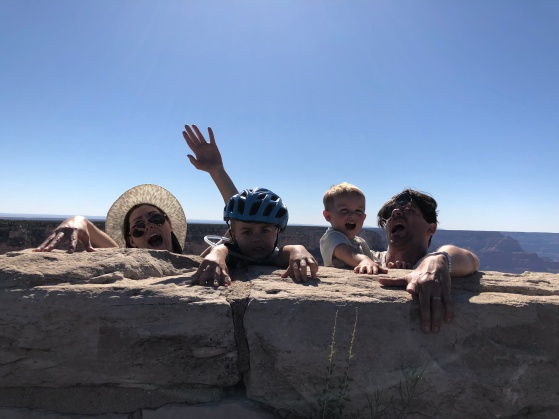 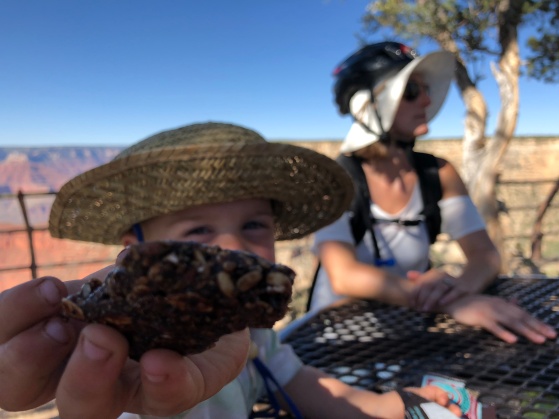 Don picked us up after our ride and took us to a Grand Canyon spot that is just getting discovered.  Out of respect for him, we won’t share the exact coordinates, but trust us it was worth it.  A quick hike on a forest path, and it opens up to a beautiful spot on a cliff that sticks out, giving you a near 360 degree view of the Grand Canyon.  It was early in the evening, so the shadows added that much more dimension to the view. 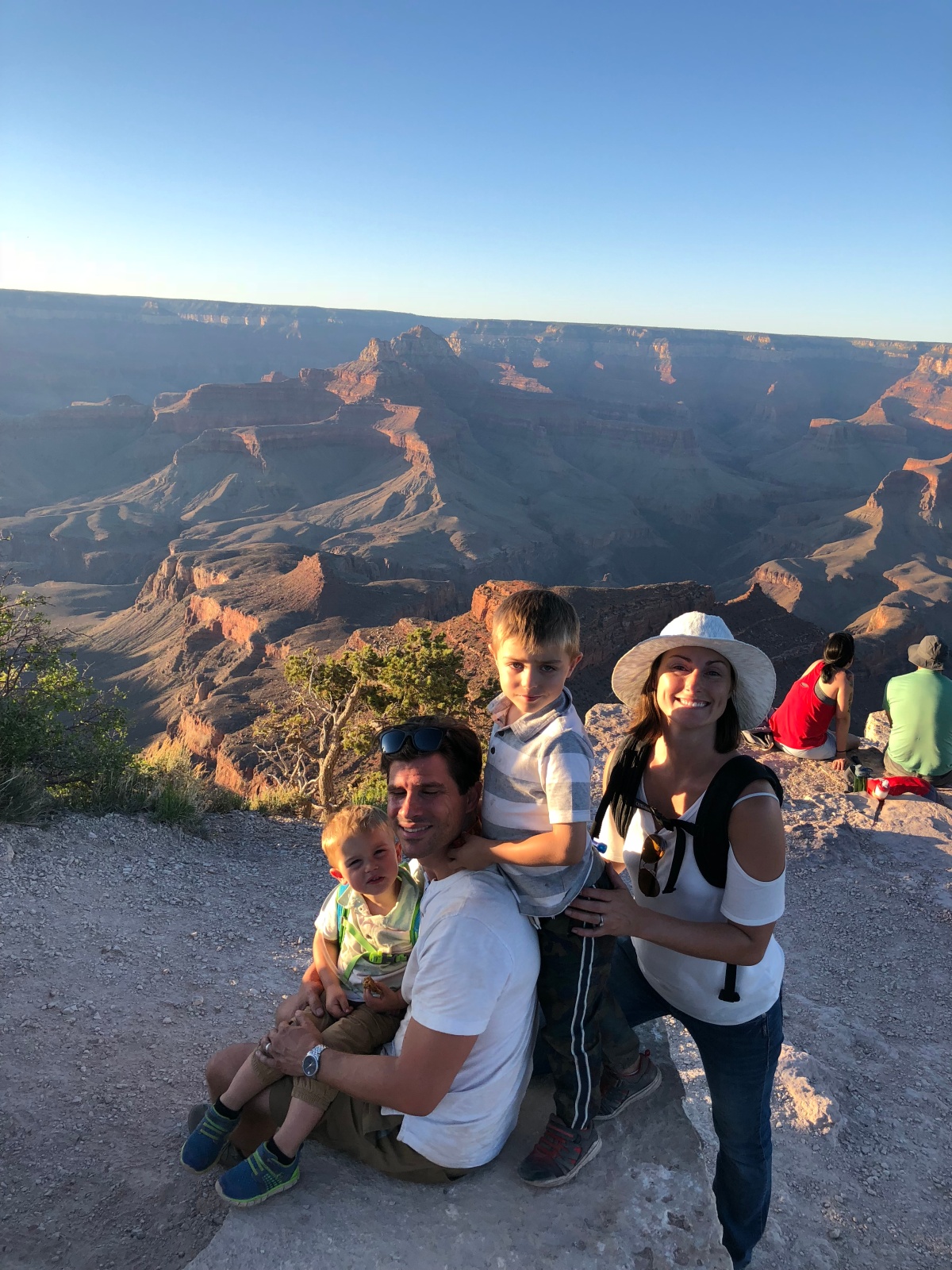 We closed the day with filets in our dining tent, a strawberry desert (did he know that was my favorite food?), and, of course, more Smores. 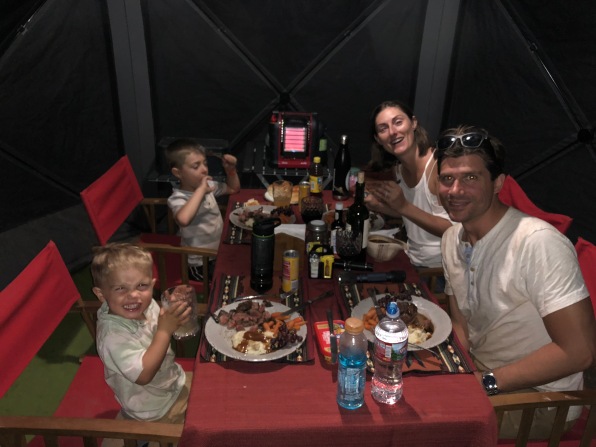 The Grand Canyon experience, thanks to Don and ALE, will be a hard one to beat.