On the drive to Page today, which was only about 2 1/2 hours, the kids slept the whole way.  It made sense.  They had woken up when the sun first peeked on the campsite and were doing their best to wake up all of the surrounding campers.

We had a final breakfast in the dining tent and said our goodbyes and thank you’s to Don and his wonderful team.   Then we took off to Page to see the Antelope Canyons and hang out at Powell Lake.

Page used to be nothing in terms of a civilization.  Then someone got the idea to build a dam, creating Lake Powell (and destroying a number of mini-ecosystems).  This created a number of jobs and a newly inhabitable area, so Page was born.  We were later told by our host at our new Navajo B&B that the man that came up with the dam later decided he didn’t want to do it, but others did it anyway.  It is what it is now, and so we have Lake Powell and Page.

We used “Ken’s Tours,” which seemed to be one of two, but they were great.  The tour guides would routinely take our phones and cameras and take the pictures for us to ensure they would come out right. 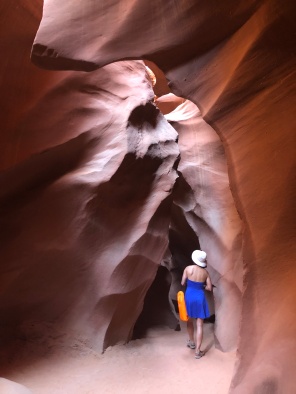 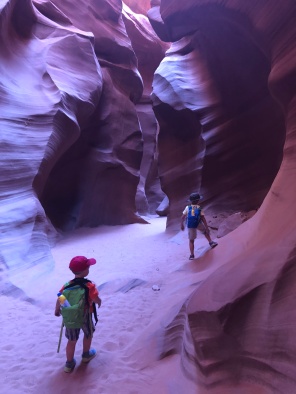 I don’t know who Ken is.  We didn’t meet him.  Our guess is that he is living like a king in Patagonia right now.  His business had been operating for a couple decades, making a little money I guess, giving tours of the Antelope Canyons.  Then four years ago the internet made it so that everyone wanted to see these marvels, and I’m not sure how Ken’s antiquated POS system keeps up with the constant onslaught.

You arrive and hope that your reservation was remembered by Ken’s reservation system (ours had an issue, but it all worked out), and then you work your way in.  It’s $50 cash per adult to walk through.  The kids were free.  The crowds were endless.  Ken is banking it.

Katie, thinking ahead, wore her blue dress to shoot for some nice photos.  I, on the other hand, did not. 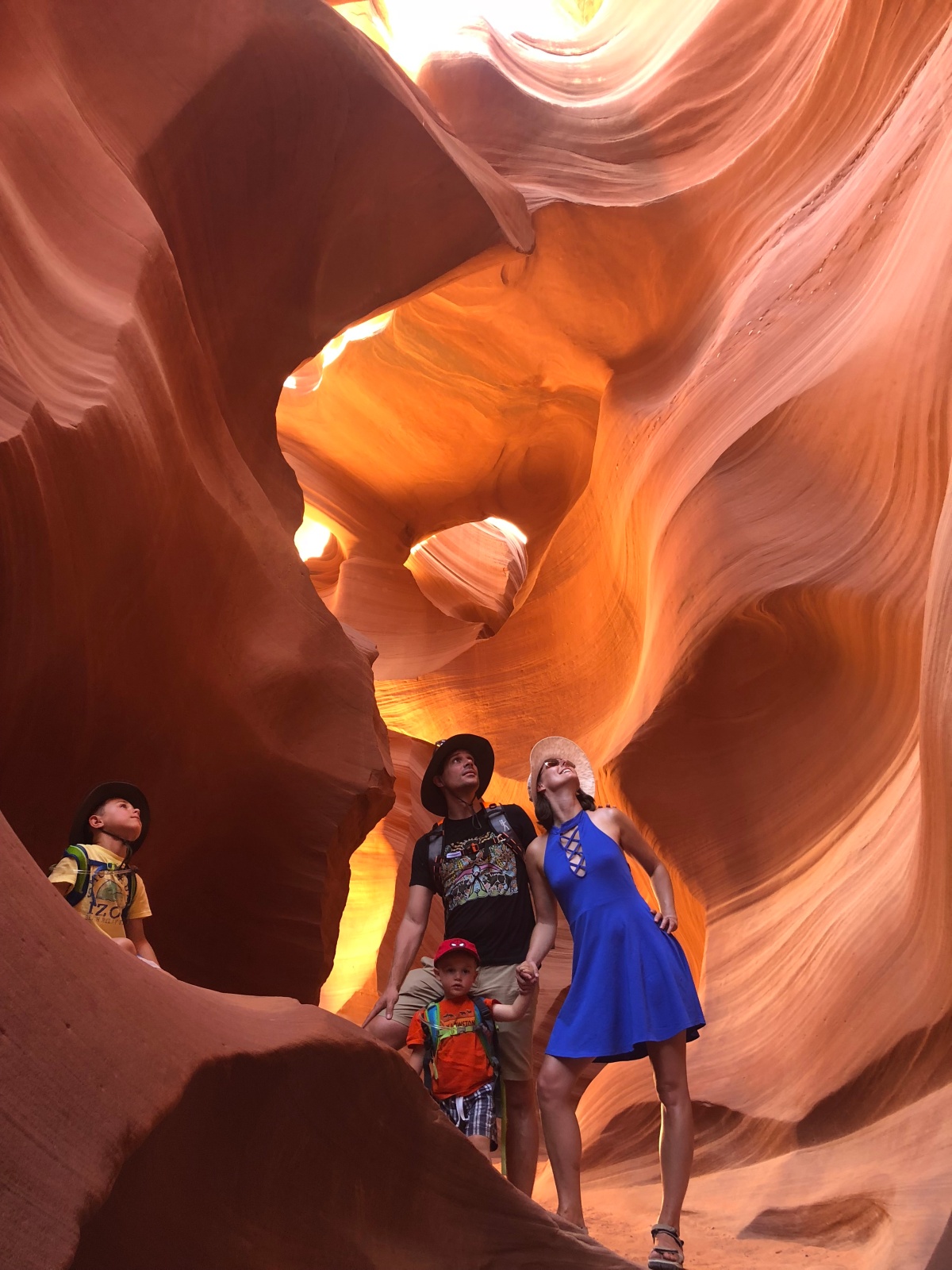 The Antelope Canyons were pretty fun to go through.  You’ll enjoy them too if you like taking pictures, which is 90% of the experience (10% being walking and squeezing between these formations).

We were now hot and gross (it’s the desert you know), so the next activity was taking a dip in Lake Powell.  The drive actually took us up into Utah, similarly to how Monument Valley was a couple miles into Utah (how did Utah draw these borders so well?). 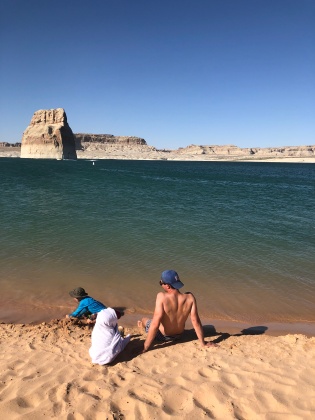 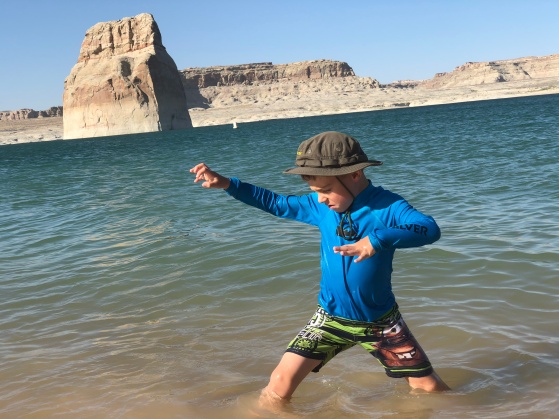 Lake Powell.  It was picturesque, frigid (at least compared to the 100+ degree heat), the people there spanned every socioeconomic description, and nothing exists to block the desert wind.  That created this hybrid situation of an incredibly refreshing experience as you dipped into the cold water to escape the desert heat, all the while with sand violently blowing into your eyes.  We didn’t last too long.

Last, we went to Shone Dine B&B, a Navajo “glamping” experience.  Glamping was their term.  Don’t believe it.  We just did “glamping.”  This was staying in a small cabin with sufficient beds and nice blankets.  We decided we wouldn’t even unpack and would wear the same clothes the next day to keep things simple.  #roadtrip

Paul, the unexpected caucasian in this equation, gave us the tour of the B&B property with his wife Bae, a genuine Navajo who seemed like one of the ones that tried to break away from the Navajo life but found her way back due to life circumstances, with Paul.

Paul recommended a restaurant to us for dinner, Antelope Point.  Sounded great, we headed there.

We arrived after a 25 minute journey to the place that provided all of the evidence needed that there is a lot of money hiding out around Page.  The boats parked at the dock varied from boats you could treat as your house to badass speed boats that prompted all of the expected “Let’s get one of those!!” comments from the kids. 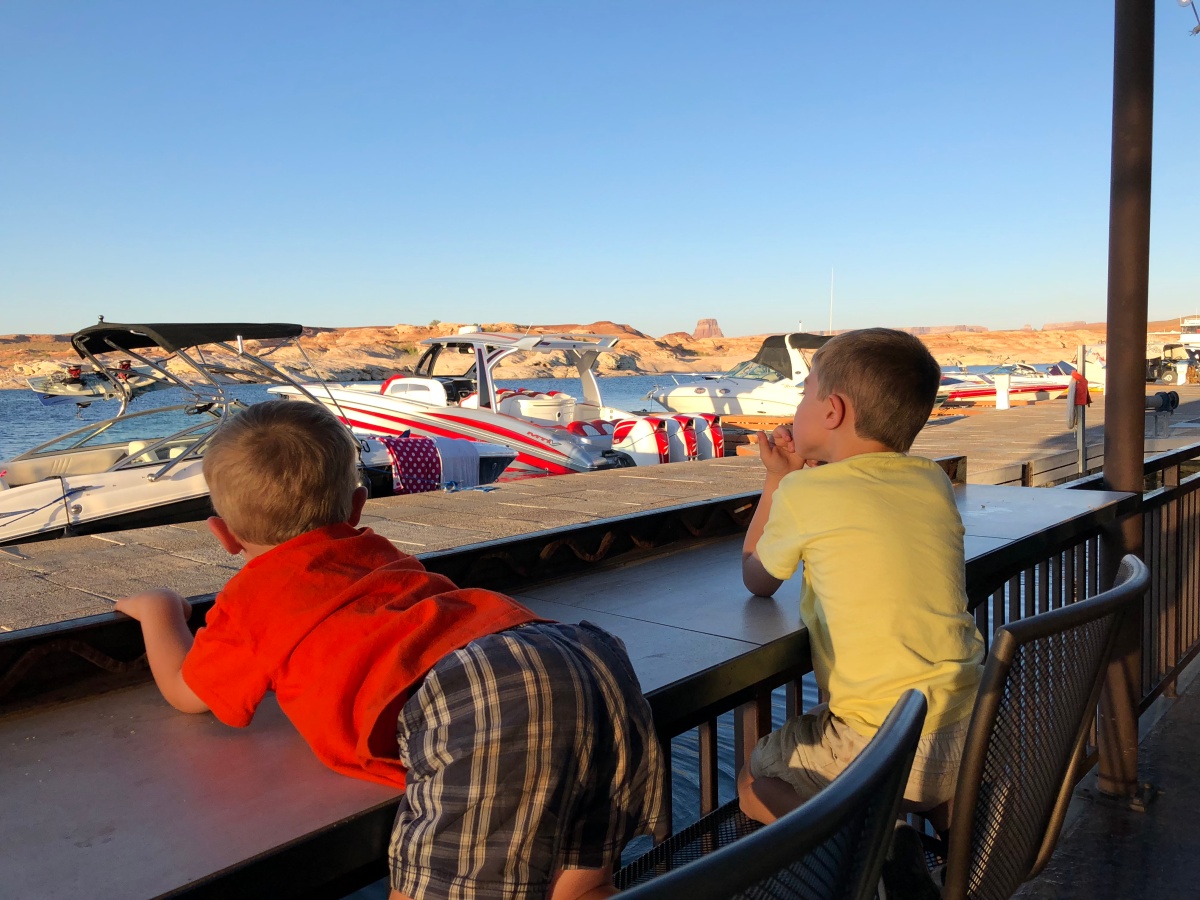 We got to see how the money was to be put to use.  “Antelope Point” happened to be the host location of an American Heart Association fundraiser that night that gobbled up 85% of the restaurant. 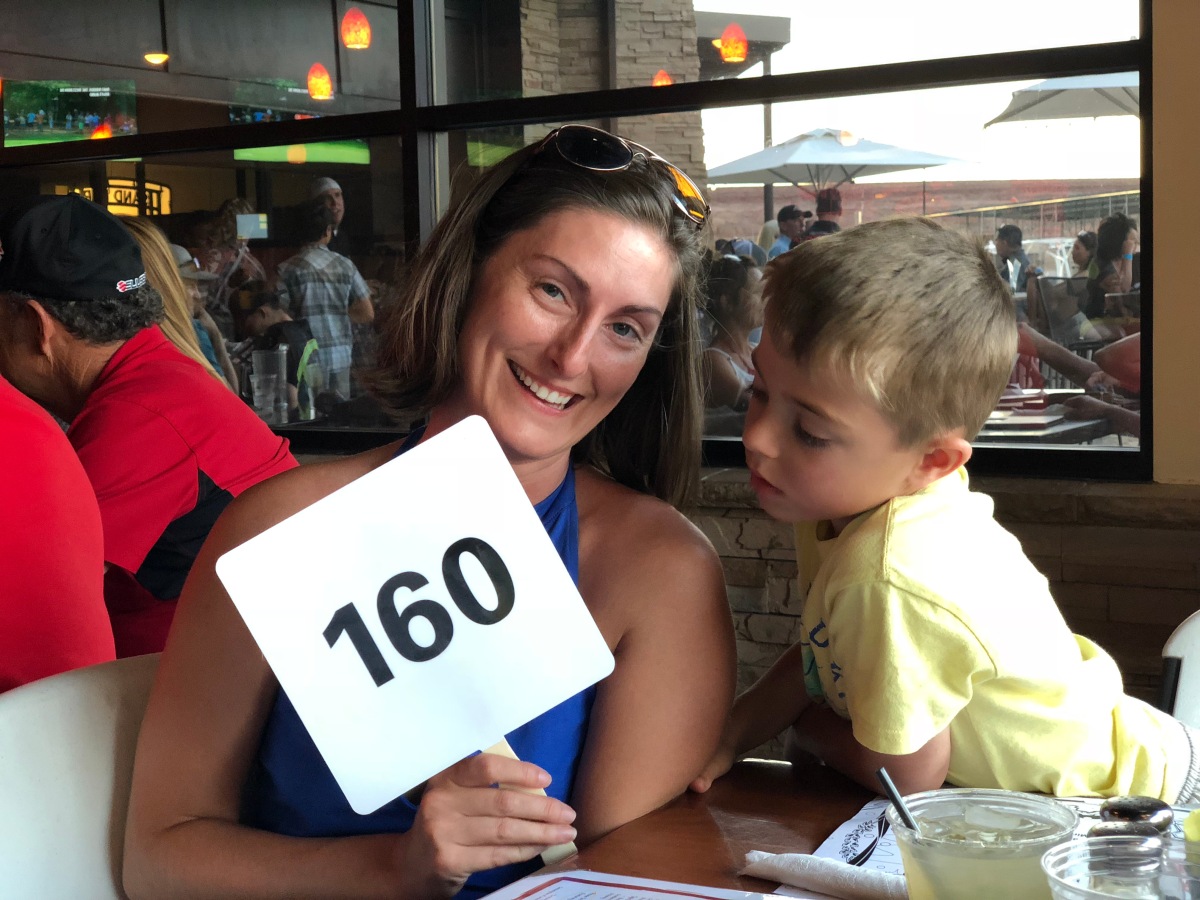 Our table ended up pretty close to all of the action.  Katie even bid on a trip to get the bidding going.

After sufficient overstimulation, we left and headed back to our B&B.  Problem was, our NAV system in our car, which we randomly used this time, had the wrong labeling on a pretty critical road.  This made a 25 minute drive a 1 hour and 25 minute drive with some Need For Speed driving to avoid a random truck following us and pulling into the areas where we made U-turns.  The kids slept through most of it, and we made it back unscathed, nerves rattled, ready to enjoy a beautiful night sky where you can see a million stars.