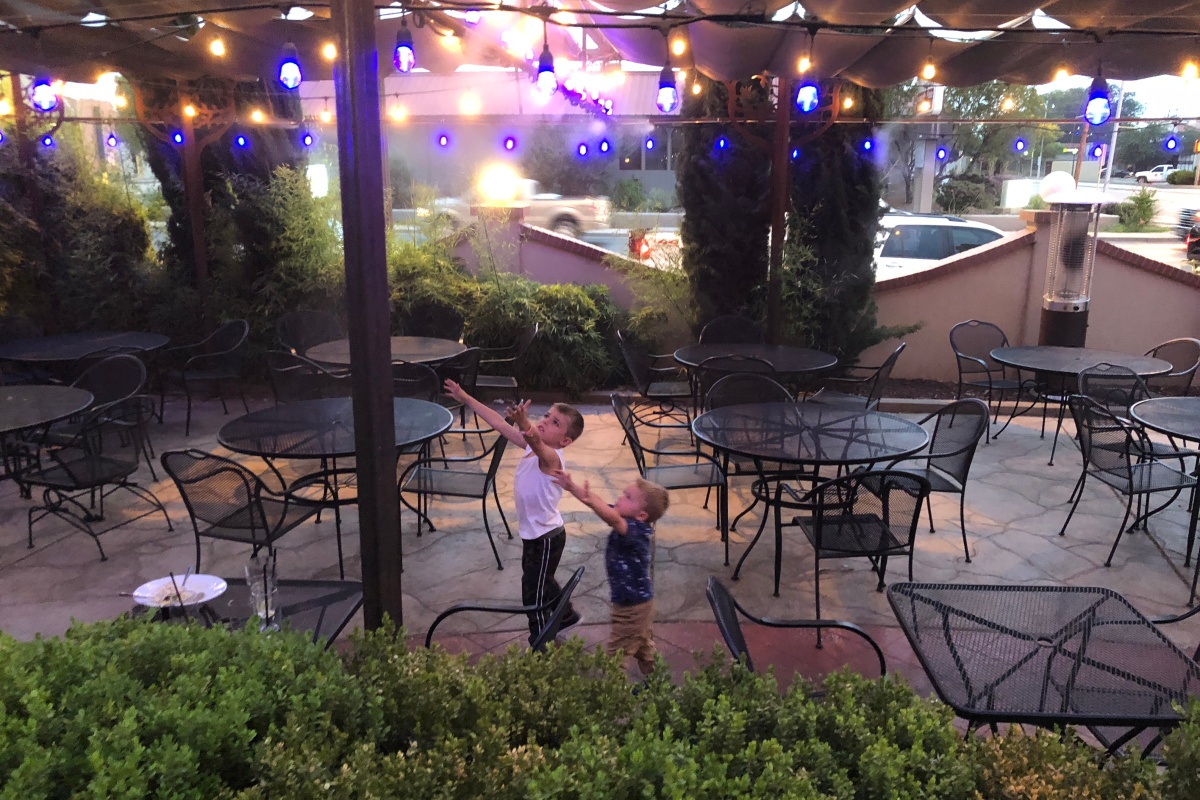 First things first, we wrapped up a wonderful weekend with the Littles.  This is a record setting group picture with six kids all looking at the camera simultaneously.  We can’t say enough about how much we enjoyed spending time with these guys.  And happy birthday Stella! (she’s the new 10-year-old on the right)

At breakfast, Andre begged for coffee.  Katie ended up getting him some decaf to… you know… see.  He loved it, and recruited Owen to help him with the cream.  Ollie: “what the ____ are you drinking Andre?”

After the yummy breakfast buffet in which the kids determined whipped cream with M&Ms, chocolate, and a strawberry or two was good for breakfast, we packed up, said goodbyes, and hit the road.

To Carlsbad, stopping in Abilene along the way, where we did nothing less than save the world.  Yes, in an escape game (trip count 3, day count 4).

The boys were reminded by the loud voice above numerous times that the random trim they found in a hidden room was not part of the game and could be left where they found it.  But, you know, they were convinced.

We played some arcade-like games with the boys, let them fight over how much neither one of them wanted to redeem their prize ticket for a stuffed animal (we ended up with a Koala that neither will touch), and were back on the road.

This may be the longest drive of the whole road trip, so we are experimenting with Kindle Fires.  We are a little nutty about restricting video game time on our road trips, but these we were able to limit to 100% educational stuff, so, we’re trying them.  We just hate it when Andre asks to play a game when we are out seeing amazingness, so this may be the last time they are used on the trip just to shake addiction tendencies.  All in all, it went well.  Andre did ask the next day if he could play again.  “Don’t ask us that.”

We arrived at our AirB&B in Carlsbad around 6:30pm MST, and started to unpack.  At first glance, this was PERFECT.  Each boy got his own room.  A good room for us, kitchen, laundry… it was road trip gold. 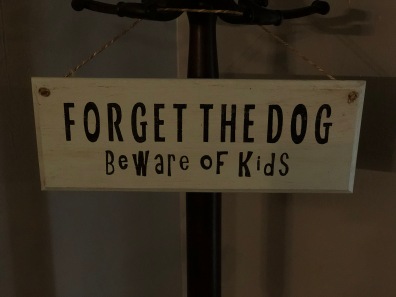 The first thing was minor, a beeping smoke detector needing batteries changed.  The owner was around in 30 minutes to fix.  No biggie.  I asked her about restaurants.  The Mexican restaurant she recommended turned out to be closed.  And lots of bars in the windows.  Starting to see some clues.

We resorted to TripAdvisor and picked the top open place.  See featured image at the top of the kids playing with the misters (not men, but things that spray tiny water droplets in mass).  Yellow Brix would have been the perfect place to enjoy a nice evening outdoors under said misters, but no one was outside.  Low and behold, a massive thunderstorm was beginning to roll through our desert town.

I don’t want to understate this.  It had not rained at all in Carlsbad, New Mexico since OCTOBER.  We showed up, massive thunderstorm.  I was called by “Chip,” the other host person on our AirB&B, right after we ordered food.  “Hey, there is massive hail coming your way.  Like baseball size hail.  If you want to use the garage at the place, you can.”  Me, “Do I need a garage door opener or anything?”  Chip, “No, just push it up.”

We had dinner at the place – it was very nice.

If you care to see videos of Owen adorably trying to eat his pasta and then Andre’s (the above is what Andre didn’t finish), let me know in the comments.

The boys did the dishes.  #lifeskills 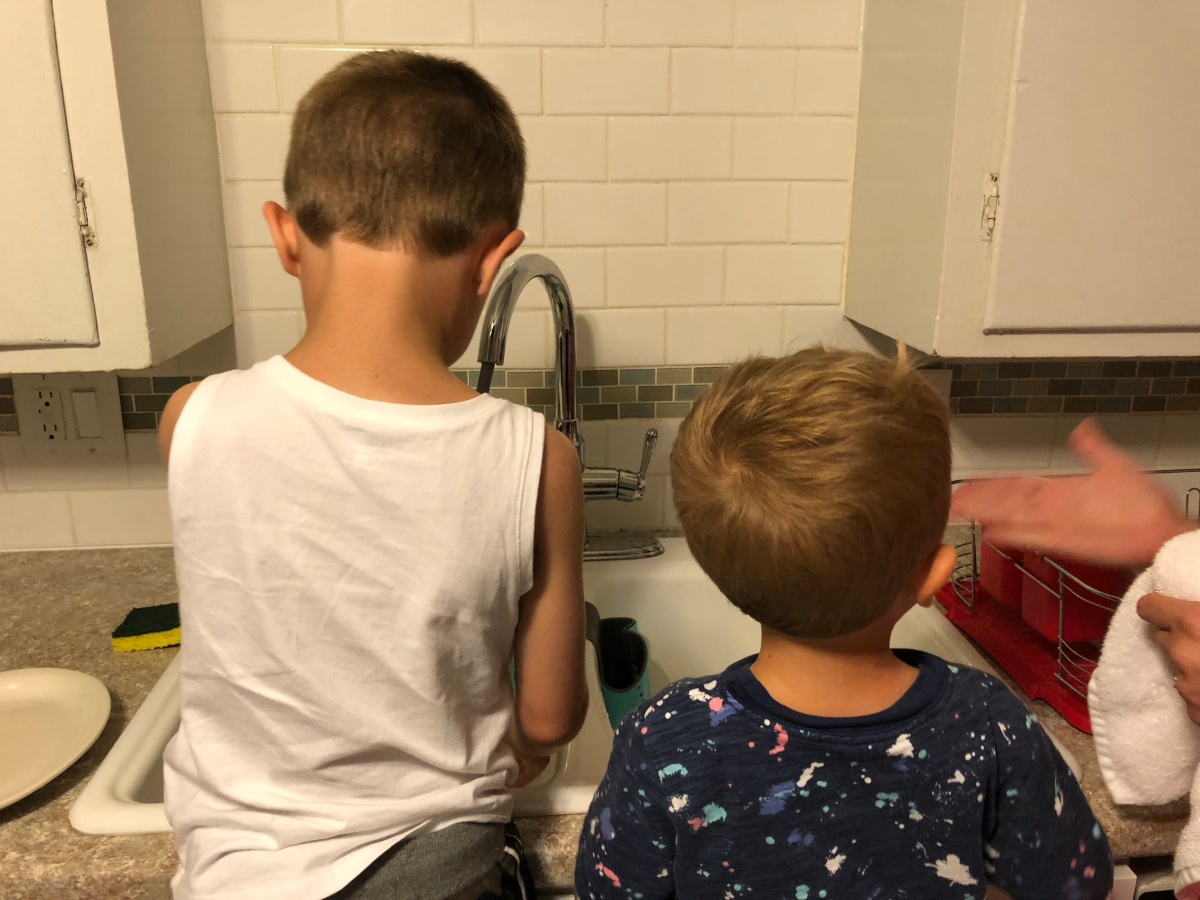 Okay, that’s the last picture I took of the night, but the saga of our AirB&B couldn’t help but continue.

Katie had fallen asleep around 10.  I finished blogging around midnight.

A dog is barking.  It’s late.  That’s random.  I start spinning about some stuff on my mind.

Finally, I clonk out around 12:30.  The rest is hazy to me because I’m seeing Katie do this in bits and pieces while I’m trying desperately to get a little sleep.  Stupid dog, it’s 3am?  Where is your owner?

I’ll tell you where his owner was.  Across the street, the horde of people that lived in that house, and maybe a rival posse from the other side of Carlsbad, were basically set to do battle.  Some guy yelled “You better get the F*** out of here!”  As Katie stood crouched, staring out the window, she witnessed a couple people running towards a truck (they are all trucks here), and the truck alarm went off.  One of those loud honking ones.

A random truck had been sitting idle and running, with its lights on for the last few hours outside of that house.  When the alarm went off, that patient dude pulled up next to the barking truck, then people poured from the house towards yet another truck, hiding behind it.

Katie assumed a gun battle was coming.  Alas, turned out to be just middle of the night screaming and yelling.  Katie went and laid with Andre and contemplated an exit / defense strategy should violence spill into our place across the street.