I started the day scrounging up what seemed like a good breakfast start for the boys, apples, strawberries, and a hard-boiled egg.  They weren’t impressed.  They no longer like hard-boiled eggs.

On to the Carlsbad Caverns!!  They are about 30 minutes outside of Carlsbad, and we got there early, about 8:30am.  TIP:  Do that.  Don’t show up at noon because the crowds swell throughout the morning.

The first new friend we met on our way into the caverns was this Tarantula, we’ll call him Ted. 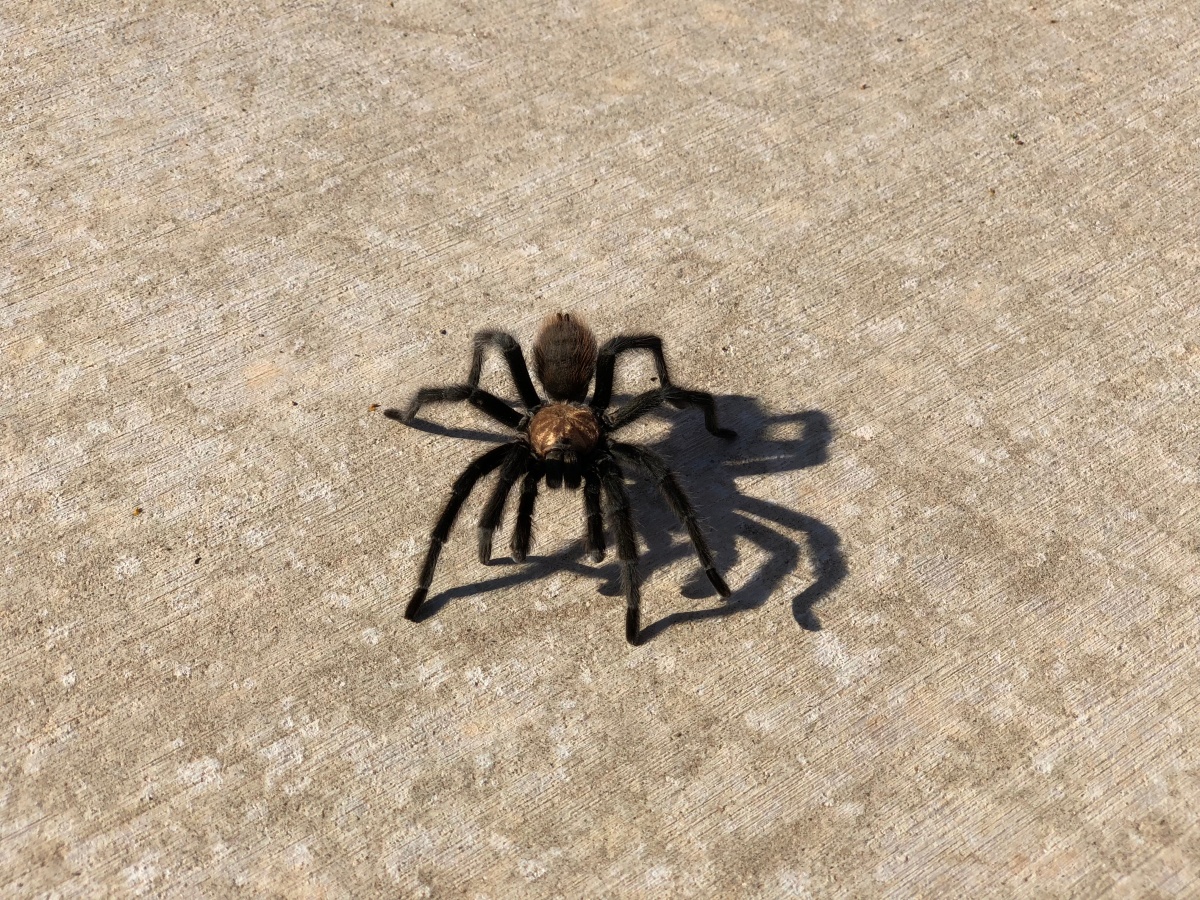 Even though logic and knowledge told me he was harmless, I have had the ebee jebees about spiders ever since Arachnophobia, starring John Goodman and I think some other people. Here’s the broader Tarantula Ted experience if you wish (if it works for you, mine is kicking an error):

Here’s our pic in front of the Carlsbad Caverns sign (shot by a very nice volunteer photographer with depth perception issues and a large thumb). 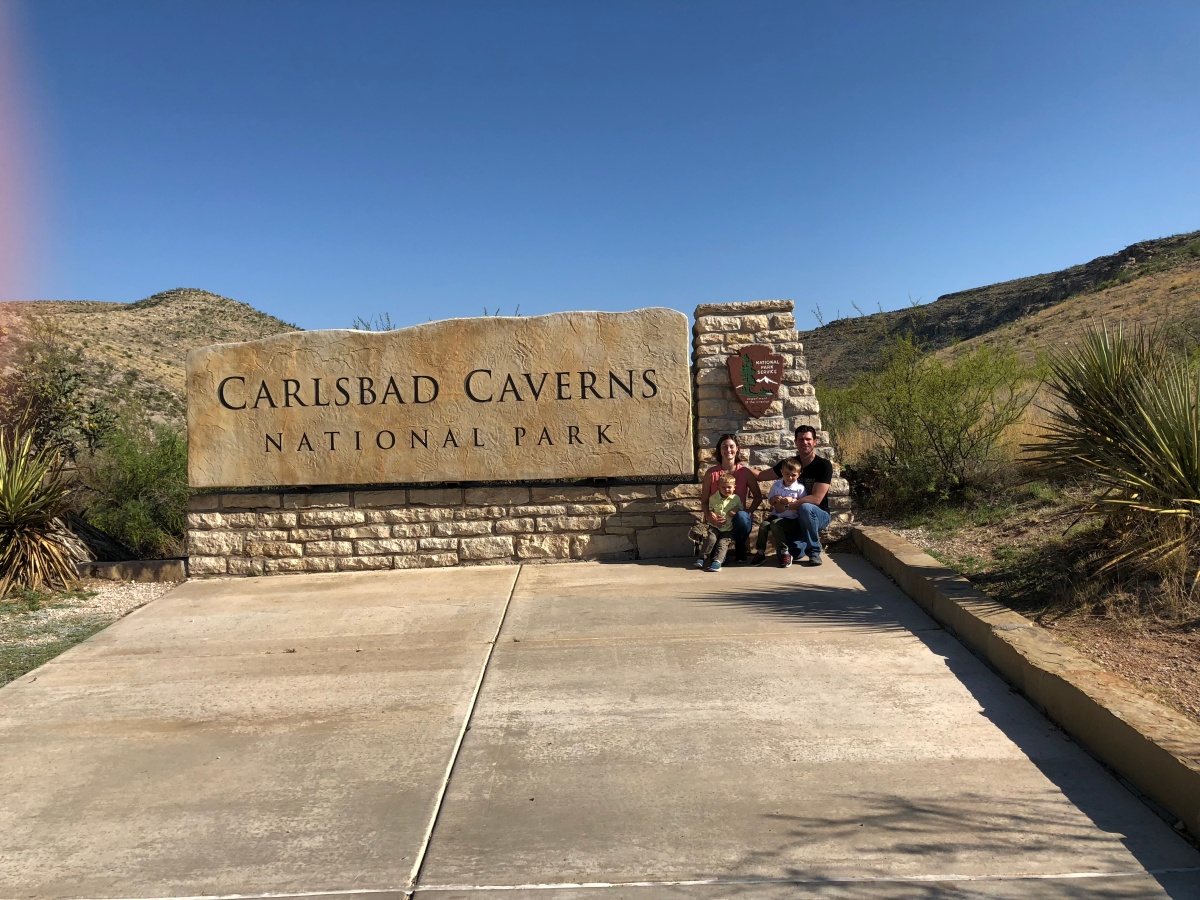 The Caverns.  Wow.  If you have never been, please go.  They are simply incredible, and the picture won’t do any justice. 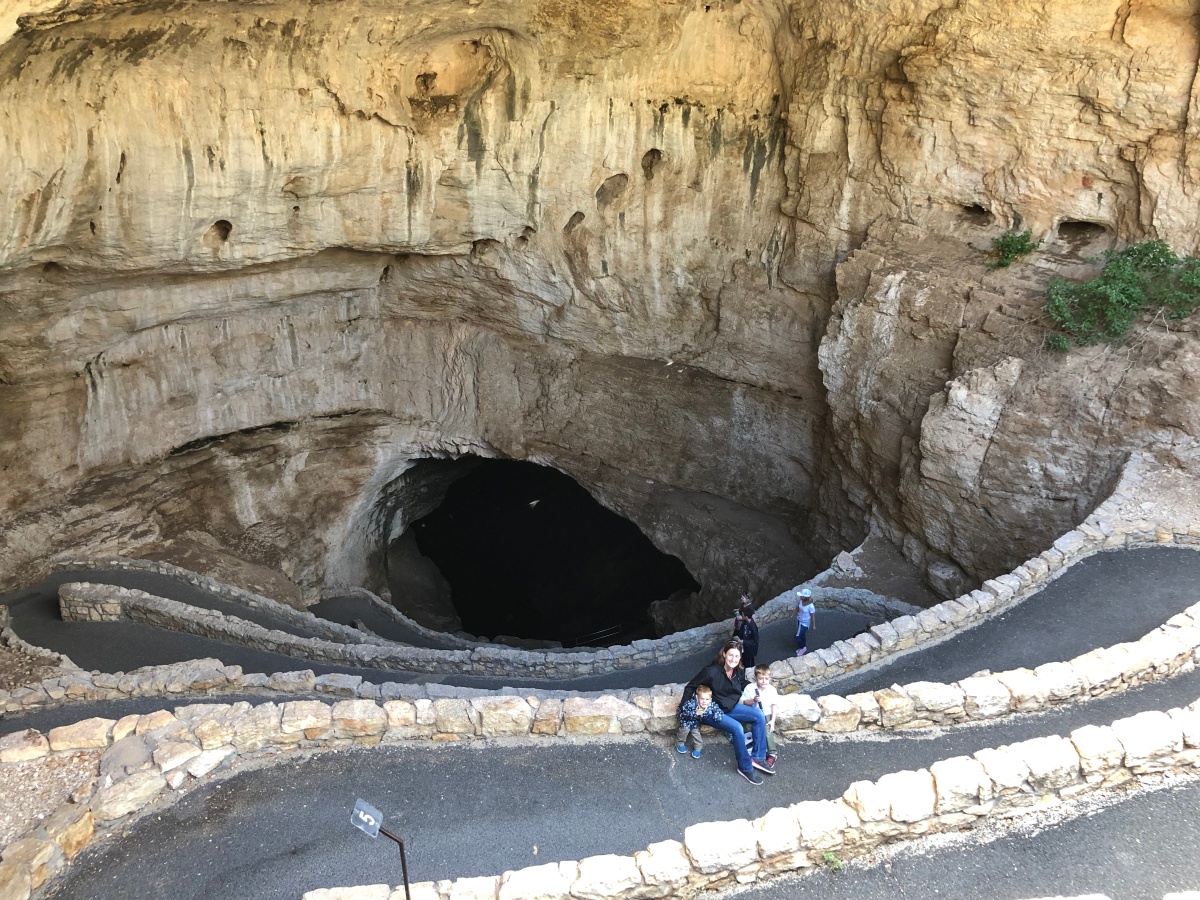 The sheer scale of the cave entrance was ridiculously unanticipated, no matter what we read.  The size of the “rooms,” with so much utter uniqueness that the earth produced, was truly awe inspiring.  Every cliche you can think of, I want to say, and it would be worth it.

The featured image above is the cave entrance as seen from inside the cave.  We were spelunking!

Here’s some pics that won’t help. 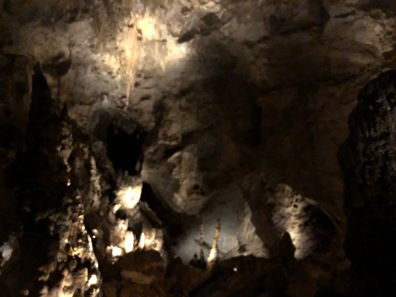 We took a break halfway.  They have a cafeteria with sandwiches and souvenirs 750 feet below the surface.  Owen practiced making as many funny faces as he could think of for the camera. 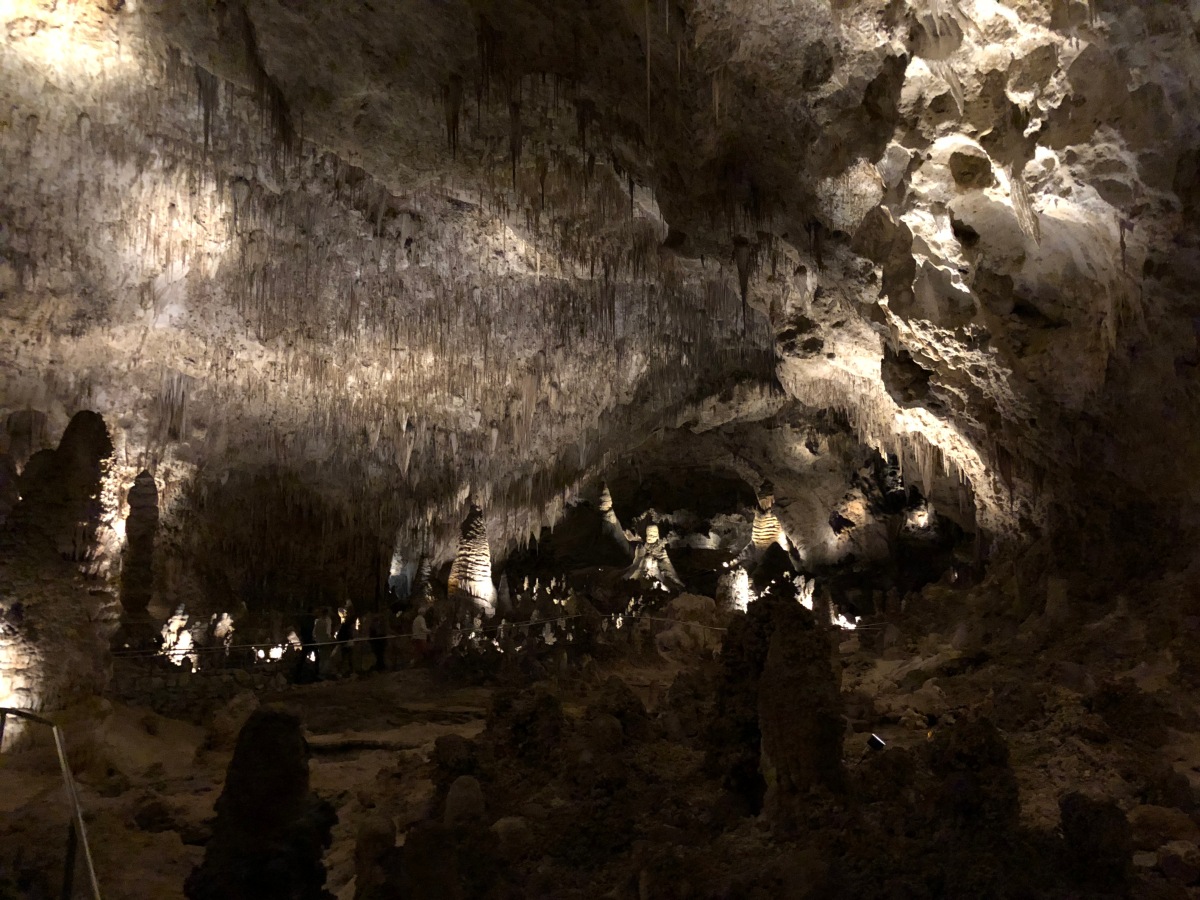 We finished with the caves, and Andre completed his requirements for the Junior Ranger badge and then some.  He took the oath from the Ranger, and the badge was his.  Proud moment.

We had quite a jump start on the day, so we decided to head south to the Guadalupe Mountains National Park, which was only about 40 minutes away, and see if we could snag Andre another badge and the family a great experience.

Here is the drive. It was… straight.

We thought it would be a good idea to hike to the Devil’s Hall, a 4.2 mile round trip.  This is getting long, so I’m going to sum up the rest of the day and night:

– Hike was hot and not well marked.

– Andre wanted to water the desert plants and used up all of his water in the first mile.

–  A boulder came down the mountain and tried to crush Owen and me.  Failed.  Owen and Jeff = 1, Boulder = 0.  The circling birds needed to fight for a new meal.

– Here are some pics: 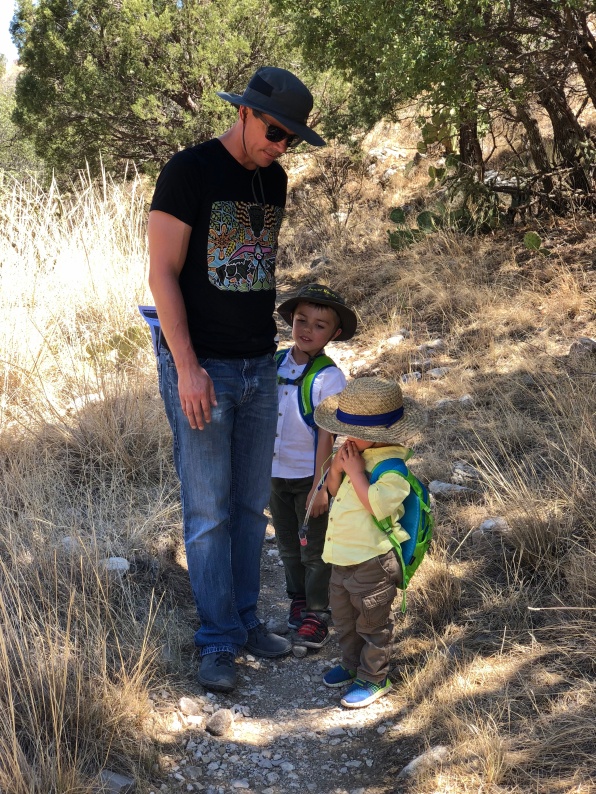 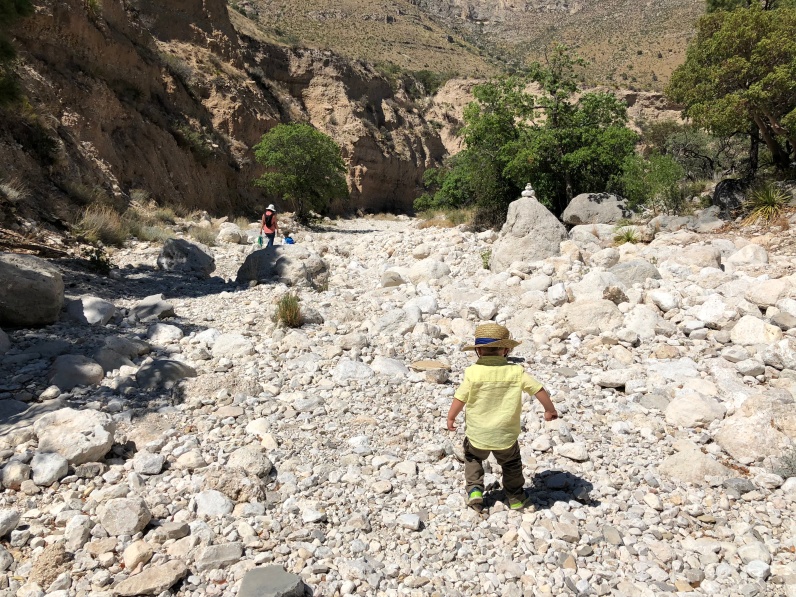 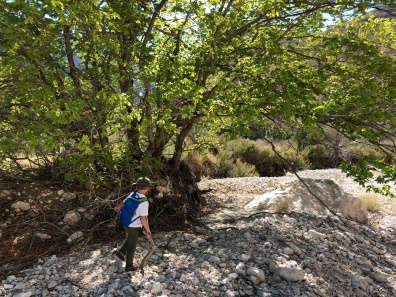 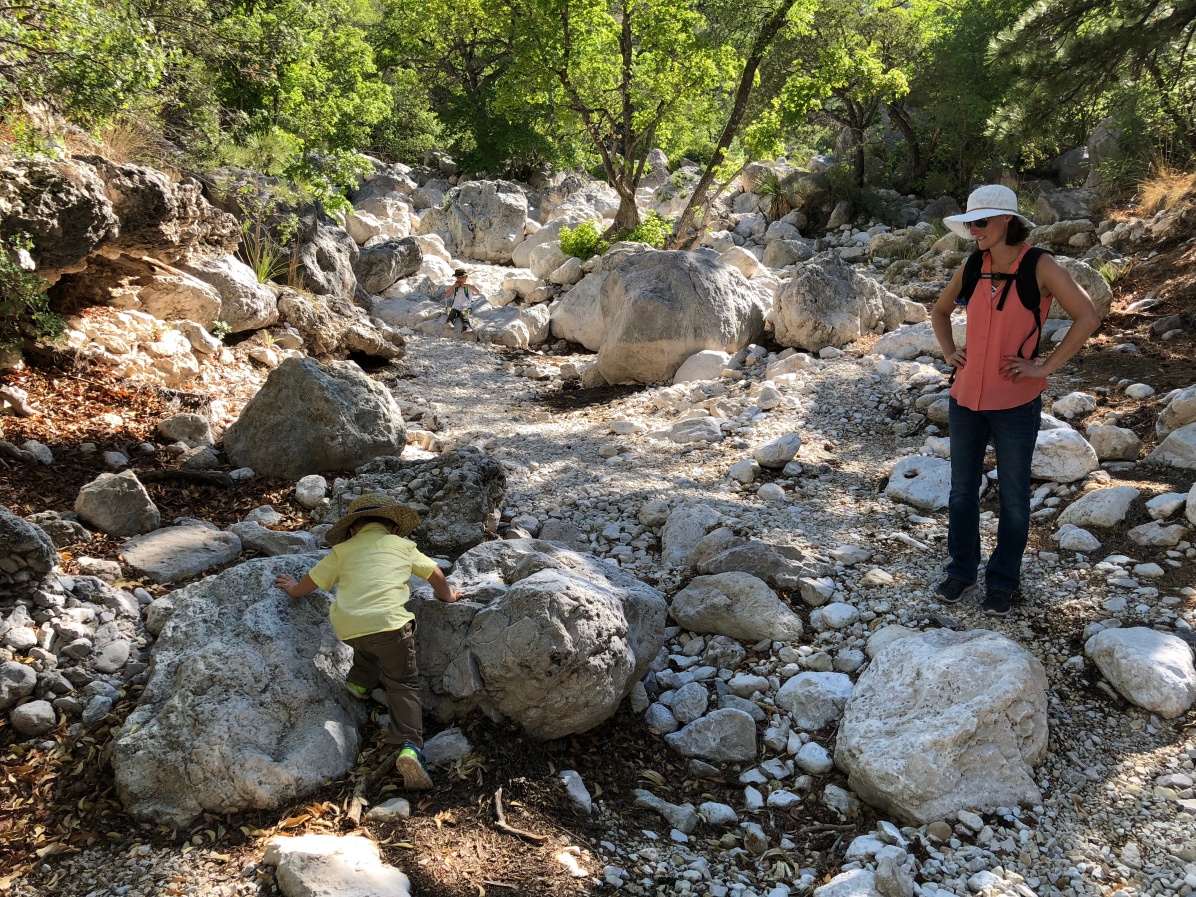 – Eventually turned around after pushing it a bit too much.

– Andre realized he had lost his new Junior Ranger badge.

– Was so thankful when we made it back to our van.

On the way home, the kids had a hysterically fun time Facetiming with their good friends, Jason and Caleb Maltenfort.  Somehow I ended up with this pic from it:

Back to that missing Junior Ranger badge.  This is where Katie and Jeff stepped in and did our thing.  That meant, I drove very fast back to the Carlsbad Caverns, and when we got there the minute they were locking the doors, Katie was able to talk the tired Ranger into going and getting a new badge for Andre.  #ParentHeroes

Understand, at this moment in time, we are exhausted and famished.  About 40 minutes later we get back to Carlsbad (the city), and Katie directs us to what became the worst Mexican food experience of our lives.  So much potential.  So bad.

We grocery shopped a bit, then finally, yes, back at our AirB&B at about 10pm MST, ready for showers, snacks and glorious sleep.

Problem:  The air conditioner isn’t working, and it’s the desert.

Our host wasn’t responding, didn’t have her phone on her.

Katie checked, all hotels in Carlsbad were booked up by “all the oil guys.”  I guess that’s a thing.

So, we packed up, drove to Roswell, NM, and we went to sleep that night super late with the aliens.

4 thoughts on “Indiana Jones and the Lost Badge (Day 5)”