When the genetic cards were dealt at my birth, I was blessed with a light-sleeping seven-two off-suit.  This meant that when the third day started off like so many others do, with the children waking up and making noise, I was now up and wondering how I could keep them from waking Katie up, too.  I did what I usually do: I shushed the kids repeatedly until we all had empty enough bladders and sufficient public-appropriate clothing to get out of the hotel room and on to breakfast. 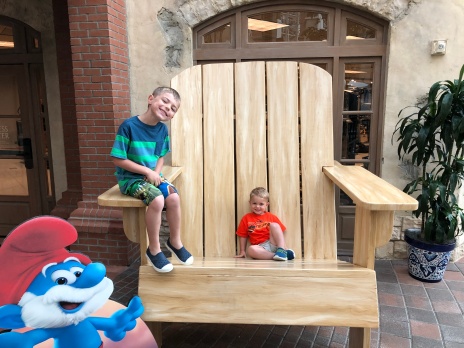 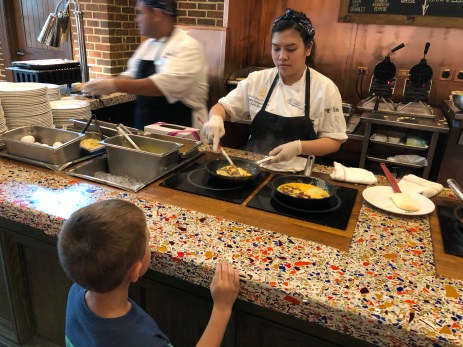 Here’s where I get off the cross and admit that I enjoy eating breakfast with the kids, especially when it’s a great all-you-can-eat buffet with an omelet bar.  Andre and Owen explored bacon omelets (no cheese for Owen this time – he’s random about meats and cheeses – the boy does not like butter – WHAT?!), and I had whatever veggie items I could stomach dumped into my omelet, with bacon, because I’m healthy.

Katie and the Littles were then up and ready to splash around in the water park. 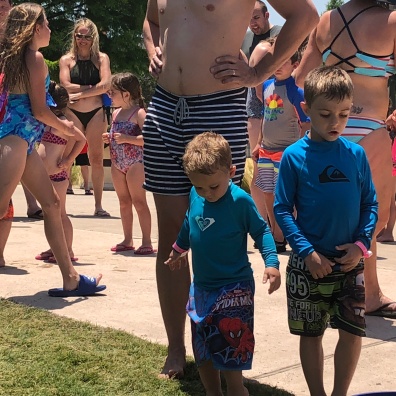 No massive head trauma today.  Ollie Little, pictured on the right, was a real trooper, battling off blistered 2nd-degree sunburns to play with the other kids at the park.  Papa Smurf says, “You too should talk to your babysitters about adequate sunscreen.”

The Smurfs were in full effect back at the Gaylord.  The kids rocked a Smurf scavenger hunt, and the Gittelek Clan (the 10 of us) destroyed the other Smurf-flavored escape room, I believe setting a record that may have lasted that whole day….

That night we partied with the Smurfs, and it was Smurfurific.

Okay, honestly, it was a disaster. The Littles had lost one of their 27 or so kids, Andre had the same fear of the big Smurfs that I did of clowns as a child, and Owen, well his finger got stepped on. Happy news, they found their kid, Owen got his finger kissed, and we found a safe distance to enjoy the Smurfs:

At least our kids got some balloons from easily the best “balloon artist” I have ever seen.  Using 33 years of balloon making experience, Christopher Lyle captured the true essence of Andre’s balloon request, “The Fart.”  The result is lovingly placed here on Owen’s head.

That capped off quite a day and night.

One thought on “Blowing out Dallas (Day 3)”