We arrived at Yellowstone today after a short 3.5 hr drive from Butte, MT. It takes a bit to get me excited about a typical, plain-jane hotel, but the Best Western we stayed at in Butte was fantastic.

The pool was clean, the rooms had shampoo and conditioner (something Excalibur didn’t have), great service and spacious room. Doubt any of you would be traveling through there, but if you do, I would recommend this Best Western.

Yellowstone is very different than any of the other places we have attended thus far. First off, the place is insanely expansive. So much space and oddly a ton of dead (burned trees). Jeff said when he came to Yellowstone 25 years ago, he remembered just a ton of burned land. The burned land now has a ton of new growth, so the trees are quite small.

We stayed at the Old Faithful Inn lodge, which has a couple interesting things about it. It is a very historic building and went through a large earthquake many years ago that totally rocked it. Some sections are stilled closed off and the door to our room was difficult to close due to the shift. 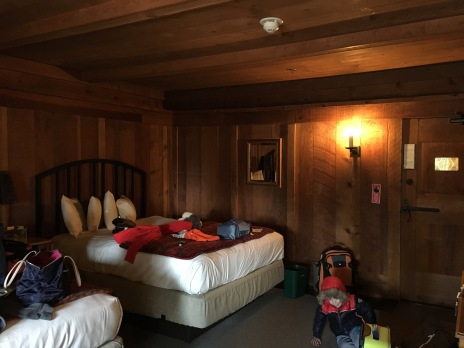 We stayed in a really cool room that was part of the original structure built way back in the day. It is only 1 of 10 rooms during the era that had an attached private bathroom. The room feel was just like back in the day, and it felt like a time warp. That was the cool part; the not cool part was when it came to sleepy time….

We decided to check out the Grand Prismatic Spring. On the way over, we saw this friend:

The springs were super cool! We really enjoyed hanging out and seeing the colors. There was a lot of steam due to the weather being cold, so it was a bit difficult to see the colors on some.

Tip #21 – Don’t go to Yellowstone in May. It is a bit less crowded, but because the weather is so cold, many of the geysers and springs have just a ton of steam.

We decided to sit on the boardwalk and check out a spring for a bit:

Next, we headed to Old Faithful and the geyser hill. This is the highest concentration of geysers in the world. Super awesome to see these up close and to see the colors and bubbling water from the ground.

Here is Old Faithful giving a warning via symbols to park members that bears pick up humans and eat their heads off: 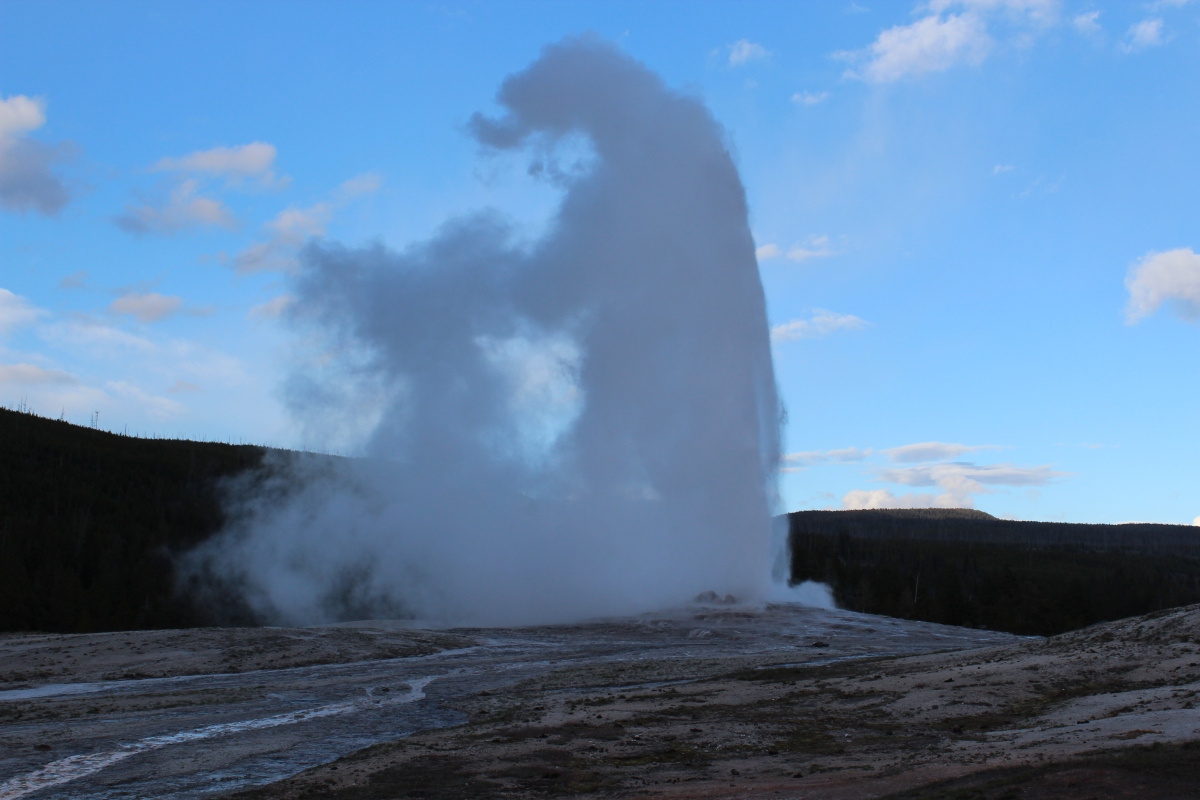 So here is something to note: Yeah Old Faithful does go off frequently, but it also is not super consistent based on my limited experience. I thought it went off every 15 min on the dot, consistent like. But it actually ranges (from one of the things I read) every 35-120 minutes. So you do end up waiting a bit for it to go off.

We ended up heading to the local restaurant at the Old Faithful Inn. Dinner was pretty crap and over priced, but the staff was nice. Then we headed up to bed and that is where the authentic nature of the “resort” set in.

The room had old time furnace grates, and they were silent when on (which I guess is good). Jeff and I didn’t think they were on and the room was ridiculously hot, so we opened our 19th century windows hoping to get some airflow. This is when I truly learned the value of return vents!

So, at three in the morning, after both of us getting no sleep due to the literal slanting of the bed because the floors were so jacked up from the quake, we decided to open the windows a ton, twist the knobs on the furnace (not sure if that really did anything) and turn on this ancient looking fan.

As Jeff stumbled around the room like a real zombie and knocking stuff, he got the fan plugged in. Then, due to the noise, Andre started stirring. So I moved to Dre’s bed, and we finished out the rest of the night…mostly awake.

My recommendation, yeah the lodge is really cool from a historical perspective, but totally not necessary to stay there.